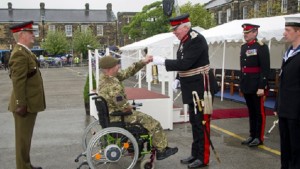 The Preston Military Show is the largest display by the Armed Forces in the North West, and involves soldiers and cadets from Cheshire, Merseyside, Greater Manchester, Lancashire and Cumbria.

In 2011 around 8,000 spectators attended and organisers are hoping for a similar turn-out this year as Preston welcomes the Paralympic Flame in the city’s Guild year.

The Flame, part of the Paralympic Torch relay, will be escorted into Fulwood Barracks by injured and sick soldiers from 42 (NW) Brigade’s Personnel Recovery Unity and disability sports personalities. It will be held on display at the barracks throughout the day.

The 2012 Preston Military Show includes a range of youth activities which are open to the public including archery and an aerial rope slide. There will be displays by the Royal Artillery Black Knights parachute display team and The Band of the Brigade of Gurkhas. There will also be battle simulations by the region’s soldiers and the traditional sunset ceremony. (pictured) Guardsman Dave Watson Carries the Paralympic Torch to Charles Geoffrey Nicholas Kay-Shuttleworth, 5th Baron Shuttleworth (KCVO) Lord Lieutenant of Lancashire